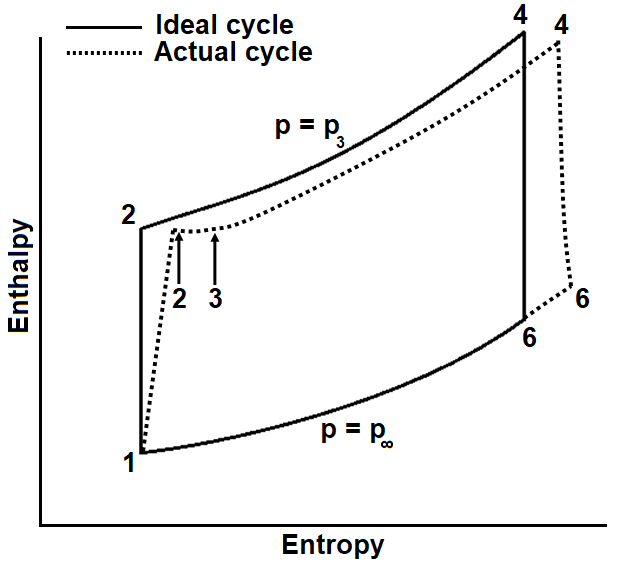 I have finally figured out that WordPress supports LaTeX, so that makes putting in endless streams of equations much easier!

The ideal ramjet engine operates on a Brayton Cycle which is characterised by constant pressure combustion followed by expansion of the combustion products to near ambient pressures. The enthalpy-entropy diagram for this engine cycle is shown here. 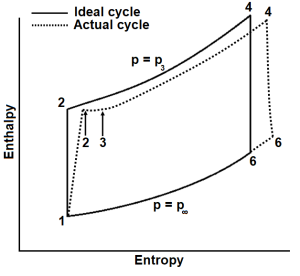 In an ideal engine air entering the engine at ambient pressure (station 1 on the schematic) is isentropically compressed through an enthalpy rise, proportional to the square of the air velocity. Energy is added to the air after the diffuser through combustion of fuel, increasing the enthalpy at constant pressure to the end of the combustor, (station 4). The combustion products are isentropically expanded to ambient pressure, increasing the speed of the flow leaving the nozzle, proportional to the square root of the change of enthalpy in the nozzle. The cycle is closed through external heat rejection at constant pressure.

However in contrast to the ideal engine cycle, an actual engine cycle experiences temperature and pressure losses occur at every stage in the flow through the engine. As shown in entropy-enthalpy diagram, the compression process is considered to be adiabatic and therefore has the same enthalpy rise as the ideal engine; but now the inevitable compression losses  result in lower than ideal pressures generated.

The flame holder can be considered to operate in a region of constant enthalpy, where the aerodynamic losses are produced by the turbulence of the flame holder (stations 2-3). The addition of heat in the combustor also generates an inevitable pressure drag in a real engine, since the combustion process does not occur at zero velocity.

Taken as a whole, the product of all the pressure losses means the final temperature post combustion (station 4) is reached with a lower pressure than the ideal engine. As a result the net enthalpy change available to create the high speed jet is reduced and subsequently a lower thrust generated compared to an ideal case.

Ramjet engine thrust is defined as a net change in total momentum of the fluid passing through the engine. In accordance with conventional aerodynamic definitions of drag, pressure terms in the total momentum expressions are taken as relative to ambient pressure.  The following equations refer to thermodynamic  station points shown in the schematic in Part 1.

For the special case where the pressure of the flow leaving the nozzle is equal to the freestream pressure, equation (1) reduces to

This statement for thrust does not define a thrust force that is equal to the integral of the pressure applied over the internal engine surface, except for the case where the total momentum at the inlet (station 1) is the same as the total momentum in the free stream flow.

If the mass flow equation

is substituted into the general thrust equation (1) together with some factoring and simplification, the following expression can be formed

It should be noted that choice of A is arbitrary. It can be useful to base the thrust coefficient of the engine using the free stream area of the air stream entering the engine A∞ such that

From the perfect gas law relationship

and the defining relation for Mach number

, equation (5) can be simplified to give

The thrust coefficient from equation (6) can be transformed into a coefficient based on any chosen area Ax, by the following relationship

The specific fuel consumption (SFC) is the rate of fuel consumed in Kg per hour per Newton of thrust, (3600 seconds)

where f  is the fuel to air ratio and using equation (4), the SFC can be related to the thrust coefficient

The specific impulse is the thrust per unit weight of fuel consumed per second, using equations (8 – 10) this becomes

The engine efficiency represents the fraction of heat released by combustion that is converted into useful work. This parameter will help to determine where the engine will operate at its best and help to factor in design conditions for a number of different iterations. The work output of the engine is the product of the total thrust and velocity, the heat input into the combustor per second is

where QLHV denotes the lower heating value of the fuel used.

From the previously developed expressions, the engine efficiency in terms of thrust becomes

Next I’ll cover the different analytical methods for deriving the performance of a ramjet engine, particularly the modelling of the intake and diffuser and the results of some numerical simulations. The modelling processes will be purely thermodynamic and one dimensional but nevertheless should provide an adequate indication of how feasible the designs are.